Link to story in the Columbia News Times:

Link to story in the Columbia News Times:
http://newstimes.augusta.com/sports/2016-08-03/county-resident-writes-commentary-on-local-basketball

My AugBball activities are the subject of an article by Chris Gay in today's Columbia News Times. This is probably the site many know to find AugBball. But during many stretches (like the July AAU evaluation period and the high school region and state tournaments last February and March), I post basketball updates solely to the AugBball social media pages. Follow those pages here:


*Correction: In the 11 minutes of total video, I've found 2 clips, that are about 8 seconds each, where I made mistakes. I identified Desha Benjamin as Desha "Halmilton" once, and I later misidentified her school as Laney rather than Westminster. 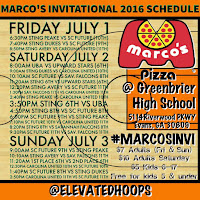 Desha Benjamin scored 14 points, Alana Davis and Olivia Owens added 13 each, and the Georgia Sting's 17u AAU team, which is coached by Will Avery, topped Carolina United 66-50 Friday in the Marcos Pizza Shootout at Greenbrier High. Also in action were the Sting's teams of rising juniors and sophomores. The games, which are scheduled throughout Friday and Saturday, are a part of a big tune up for July's "evaluation period," one of the rare times when, beginning next week, college coaches from every division are permitted to watch AAU games.


In addition to Benjamin (Westminster), Davis (Cross Creek), and Owens (Johnson of Savannah), the Sting's (class of) 2017 team is loaded with many of the area's top returning players. Aubriana Bonner (Laney) combined with Owens to spark a 20-0 first half run by causing repeated turnovers that allowed Davis and others to show their versatility and skill in the open court. And after that spurt, Davis and fellow 6'2" frontliner Sydney Grayden (Greenbrier) combined for easy opportunities, connecting on high and low post half court action.

Benjamin, a rising junior who will transfer from Laney to Westminster, also led the Sting's 2018 team with 17 points in a 54-48 loss to the South Carolina Future. Benjamin, Lexi Jeffcoat (Evans), Yasmine Avery (Greenbrier), and Jaiden Hamilton (Laney) are young enough and good enough to be contributors on this team of mostly rising juniors as well as the older team.

Jordan Brown, a rising freshman at McCormick High, and Erin Andrews, a Midland Valley sophomore, combined to bury 5 of 6 free throw attempts in the final minute of the youngest (2019) Sting team's (2019) 43-42 win over the South Carolina Future. Brown finished with 14 points and would have provided her team with a three point lead with less than 10 seconds remained were it not for a lane violation during her made free throw that opened the door for the Future to tie the game at 42 before Andrews, who scored 10 points, was fouled and calmly sank the game winner.