If you follow my AugBball posts, make sure you are following AugBball at these three places:

I've been posting updates about the area hoops scene there much more than here recently.

According to the AJC, a win today would make Wil-Co head coach Aaron Geter II the first boys coach in 52 years to win his 8th state title. And former Augusta based (and current Atlanta based) broadcaster Sam Crenshaw reported from the sideline before the game that Wilkinson County's hoops success goes back further than the school's entry into the GHSA. The school won 3 state titles as a member of the "GIA" in the 1960's.

This game is one of 14 GHSA state title games on GPB between this evening and the end of Saturday.

***End of update***
***The portion of the post below this line was published Thursday morning, before the game began***


I planned to begin my Thursday hoops viewing with Florida Gulf Coast's Atlantic Sun semifinal matchup at top seeded North Florida. But after seeing this preview of the 1A state championship game between Hancock Central (25-6) and Wilkinson County (24-6), I’m starting with today’s 4:45 showdown on GPB TV:

The 13 WMAZ report above explains that after Wilkinson won three straight state titles, Hancock knocked them out of the playoffs in last season's quarterfinals. The teams split two regular season meetings this season. Wilkinson has developed a tradition of winning (7 state titles in 18 seasons!) unmatched by almost all of its peers. But Hancock is trying to grow that same culture.

Both teams are familiar to several teams I follow. Hancock plays in the same region as Lincoln County and Aquinas, splitting two regular season games this season with the Red Devils and sweeping the Irish. And Wilkinson eliminated Lincoln County in the quarterfinals of the state playoffs with a 76-39 win.


Buck Harris’s Baldwin squad played both of these state championship participants twice, losing both to Wilkinson and splitting with Hancock.

I asked for predictions of today's winner from coach Harris and coach Wuchte. Below is Buck's response (I couldn't embed Wes's for some reason, but he agreed with Buck) and a fun AugBball fact about Wilkinson County:

@AugBball @WuchteWesley @13wmaznews I can go against a team that beat me by an average of 30 pts. Lol
Wilkinson County!!
— Coach Buck (@buckharris) March 3, 2016

Reggie Reid, Harlem High's shooting star who led the Bulldogs to two state tournament appearances in his three seasons there, is participating in one of basketball's most exciting events: ESPN's Championship Week. The network's countless channels are broadcasting 148 conference tournament games in the first 13 days of March, leading up to Selection Sunday (March 13), the day the NCAA tournament brackets are released.

Below are the highlights from Tuesday's win. Reggie scored 7 points, making 2 of his 3 field goals:

The Augusta Chronicle made Reid its Player of the Year last season. The explosive point guard averaged 22 points, 9 assists, 9 rebounds, and 4 steals per game as a senior, leading the Bulldogs to a 24-5 record and a second round finish in the GHSA 2A state playoffs. His impact on his high school team's success may have been greater than any area player during the past decade or so. During his three season's, Harlem posted a 47-34 record. During the three most recent seasons when Harlem's roster didn't include Reid, the Bulldogs posted a cumulative record of 13-54.
Posted by Chad Cook at 7:52 AM No comments:

Ahmad Rand's highlights are certainly worth a viewing! 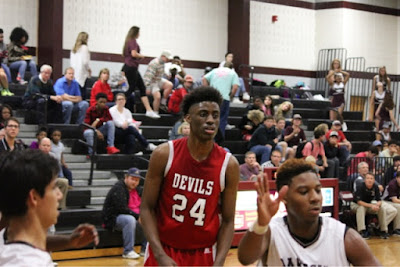 The season has ended for the high school teams I follow. I'll be posting here regularly throughout the off season. My first is a quick one suggesting you check out this highlight video of Ahmad Rand, the 6'7" junior center at Lincoln County:


I think Rand is the area's best returning college prospect. He and coach Wes Wuchte, who made the video for his player of three years now, helped the Red Devils win their first state tournament game since the 1980's this season. Lincoln County was eliminated by Wilkinson County in the GHSA class 1A quarterfinals.
Posted by Chad Cook at 10:43 AM No comments:

Thank you for visiting. The season is over for all the teams I follow except Augusta University. The Jaguars (men and women) play Columbus State Saturday in the semifinals of the Peach Belt Conference tournament. Here is the archived broadcast of Augusta's 84-76 quarterfinal win over Young Harris at home (skip ahead to the 25:00 mark of the YouTube video to for the tip-off):

Additionally, at AugBball's Facebook, Twitter and Instagram timelines there are loads of updates from Westminster's sweet sixteen and quarterfinal state playoff games as well as Westside's quarterfinal game at Augusta University.
Posted by Chad Cook at 5:07 AM No comments: