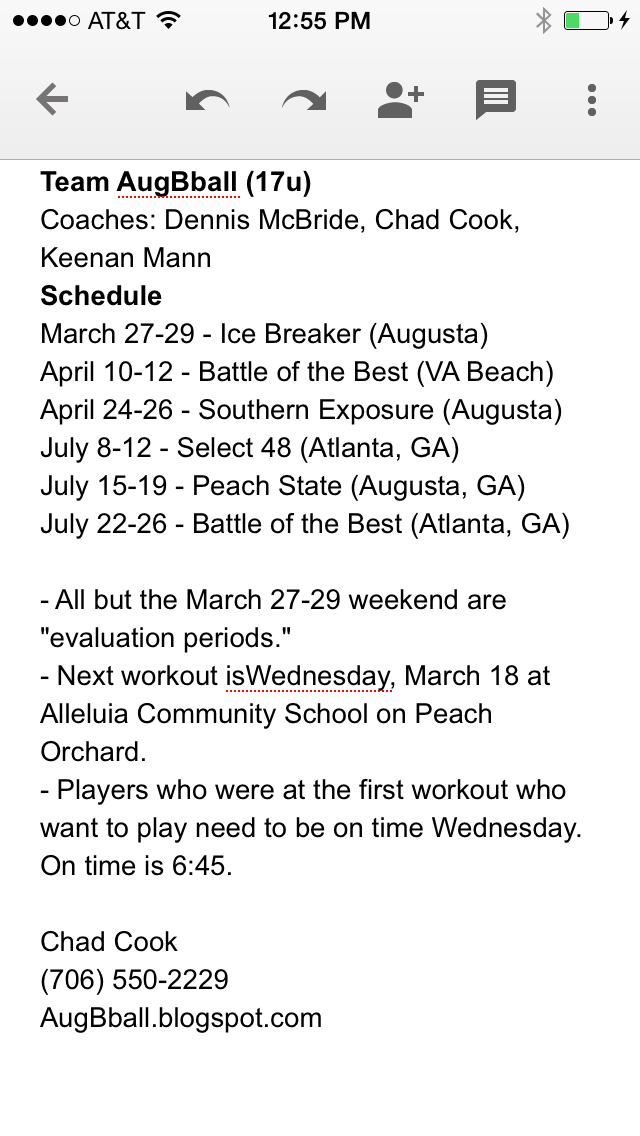 Last Sunday I posted the picture to the right on the AugBball Facebook, Instagram, and Twitter accounts.  I have a long history with AAU basketball.  I have played for, coached, and sponsored teams on some of its biggest stages (Nike Peach Jam, 17u AAU National championship game, etc) with and against some of the game's most accomplished players and programs.  But lately I've only watched from afar.  Until now.


Sunday marked my return to AAU hoops with a program I'm calling Team AugBball.  The reason I return is is to support young men with similar goals and values as mine.  I believe the game is fun and that playing it at a highly competitive level can provide great life experiences.  As you can see in the picture, Team AugBball will play in solid AAU tournaments which all college basketball coaches are allowed to attend.

In addition to the tournament's listed, we will conduct workouts and games at Alleluia Community School on many Sundays (3PM) and Wednesdays (7PM).  The players who are invited to this Wednesday's 7PM workout know who they are.  I'll see them in the gym no later than 6:45.

PS - An added benefit to running and AAU program along with my good friends Dennis McBride and Keenan Mann is that I will be able to report on Augusta's AAU happenings.  Look for information very soon about the teams and players on my radar.
Posted by Chad Cook at 10:06 AM No comments:

Monday's post was about Laney's boys and their state playoff semifinal loss to Morgan County. That splendid game was not the only basketball I watched Saturday.  On a happier note for Laney's fans, the Lady Wildcats that same day advanced to the state championship game with a 63-37 win over Decatur.


It is easy for me to understand why Saturday's semifinal game started somewhat sloppy.  The high stakes contest on Columbus State's court is an experience no coach can replicate for his players to rehearse before the day comes.  So jitters are likely partly to blame for the teams' trouble finishing seemingly easy opportunities around the basket.

But as you can see in the screen shots from texts traded between Paul Jones (a former player of mine who filmed the games in Columbus while I was in Clemson) and me, I would readily believe the activity exerted by Laney's Aliyah Collier (the #12 referred to in the text exchange) was as much the source of Decatur's inability to score as nerves were.

The Lady Wildcats head to Macon Saturday to compete for a state championship.  I expect Collier and her teammates will once again "leave it all on the floor," as they have all season long.
Posted by Chad Cook at 5:11 AM No comments:


My blog post below may read like Morgan County's Tookie Brown was solely responsible for Saturday's win.  Not so.  Morgan County has a great team.  Laney too.  Hopefully my video report above does both teams justice.
A reader of this blog and I have been texting since Laney fell to Morgan County 68-62 Saturday in the semifinals of the state playoffs.  The question I have been asked is "how can one player beat a team like Laney?"  The answer is easy.  No matter what the upside projecting recruiting experts think, when it comes to winning basketball games, there is no better high school player in our state than Morgan County's Tookie Brown, especially when he has a second half like Saturday when he scored 32 points.  My good friend Keenan Mann's remark gives some insight into how impressive a feat that is:  "That is literally one bucket every minute for a whole half."  An unbelievable performance.

Before Saturday I believed the only just outcome for coach Harris's team would be a state championship.  It is no secret I am a huge fan of the program.  After watching the team's 29 game winning streak and the way the guys accomplished it with stunning class, I couldn't stomach the thought of the pain they would go through if they were to come up short.  And honestly it took a little while to get over the pain I felt thinking about the pain they were likely feeling after Saturday's loss.

But the text conversation with my friendly reader helped to clarify my thoughts.  I now understand there was always more than one "just outcome" for our beloved Wildcats.  And Saturday's outcome, the temporarily more painful one, is a true testament to the team's greatness that the only thing that could derail the Wildcats was what had to be the best performance ever by one of the greatest high school players our state has seen.

No matter that the final game of Laney's season was a loss.  I still believe this team is as great as any our area has ever seen.  And state title or not, there is only one other team I believe may have been as great.

The video above is obviously the last game report of the 2014-2015 season featuring Laney's boys team.  Congratulations to the Wildcats for having a historically great season.
Posted by Chad Cook at 1:16 PM No comments: