A letter to a hoop dreamer

I watched a documentary on Netflix with my son called “Doin’ It in the Park:  Pick-Up Basketball, New York City”.  The title pretty aptly describes the content of the one hour and twenty-two minute film.  But, for those in whom the title doesn’t conjure up any images at all, I’ll say it was a very entertaining look at the origins and evolution of pick-up basketball in The Big Apple.

Along with lots of footage of street ball games from the old days and the new days, the film also contains interviews with some of the more famous players to grace the blacktops, as the outdoor courts are called, over the last fifty years or so.  Some of the more well-known names include Wilt Chamberlain and Julius Erving, who both went on to fame and fortune in the NBA.  But in addition to the NBA legends, there are various mentions of, and even a few very interesting interviews with, some of the more famous street ball legends.  James “Fly” Williams and Pee Wee Kirkland, number two and number four respectively on the 100 All Time Greatest Street Ballers list, as compiled by the Street Basketball Association (yes there is apparently such a list and such an organization), both featured prominently over the course of the film.  Separately, each waxed on about himself and The Game.  Lots of what they said was pure entertainment – I mean hilarious stuff.  For instance, the sixty-one year old Fly Williams, in an apparent response to the interviewer, who is off camera, asking about his notoriety, pointed his finger at his chin and said, “look at this face, I don’t have to tell you who I am, everybody knows The Fly.”  Pee Wee Kirkland, who is around the same age as Fly (I think), at one point says, in a completely serious tone, "if you’ve never left the court crying or went home bleeding, then you don’t know about basketball". 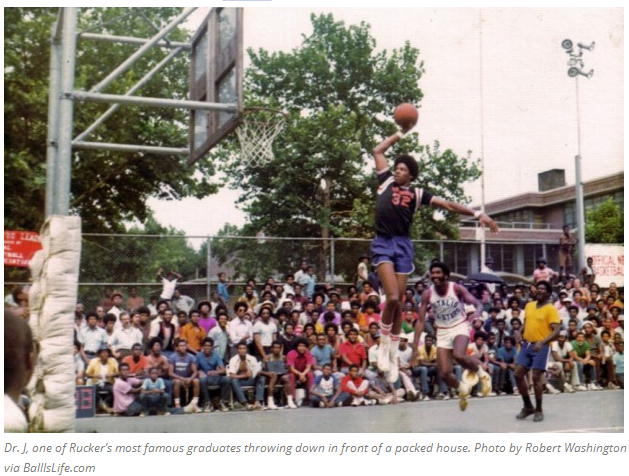 Not all of what they said was comedy.  Some of it was quite informative.  Both Fly and Pee Wee went to college on basketball scholarships.  Pee Wee went to Norfolk State and Fly to Austin Peay.  During his time at Austin Peay, Fly’s fans would chant “The Fly is open, let’s go Peay!”.  The ‘let’s go Peay!’ part of the chant is still used at games to this day.  But the real claim to fame for both was what they did on the blacktops of NYC.  And that’s what really struck me upon immediate reflection.  Both of their interviews were fraught with the phrase, or at least sentiment, “I was…”.  It’s seems that basketball was as good as it ever got for them and many like them.

That notion led me to write the following letter:

I was in the gym the other day watching you play.  As a former player myself, I’ve got to tell you, I’m not easily impressed by what I see on the basketball court these days, but I was very impressed with your game.  The jump-shot (mid-range and long), the handles, the hops, the footwork – all tight.  You’re very talented.  But I’m sure you’ve heard all that before from people considerably more talented and important than I, so take it for what it’s worth.

While I’ve got your attention though, I’d like to tell you a few things you may not have heard yet.  First, you’re probably not going to the NBA.  There are about 360 active roster spots in the NBA at any point in time and there are about a million times that many people living in the US alone.  You don’t have to be very good at math, although I hope you are, to understand that a million to one odds are not a very good bet.  And that’s before you add in all the people from all the other countries who have the same idea in their head.  After you add them in, your chances of making it to the NBA all but disappear, practically speaking.  Keep dreaming though, because there’s nothing wrong with that.  But please work on more than just your game.

Second, you probably won’t get a scholarship to play D1 basketball since only one third of one percent of high school players achieve that distinction.  As a point of reference, there are roughly 17,800 boy’s high school basketball teams in the country (there are about as many girls teams by the way).  Assuming there are twelve players to a team, that means out of roughly 213,000 boys, 700 will get a scholarship.  Good luck with that, but please keep in mind that scholars can get scholarships too.

Third, if you do somehow manage to get a D1 scholarship, you probably won’t graduate.  Okay, maybe you will, since 66% of all student athletes graduate in 6 years (55% of black student athletes), but just because you have a degree doesn’t mean you have an education that will be of any use to you.  So be careful what you major in and how seriously you take your studies and remember that your coach may care more about what you do in the next four years than he does about what you do in the next forty.
(By the way, I got a BA and an MBA in six years and there are people who do it in less time than that, so don’t set your goals too low)

Oh, I almost forgot, pull your damn pants up when you’re wearing street clothes, stop posting all the stupid and vulgar stuff on Facebook, Twitter and Instagram, and stop with the tattoos and ridiculous hairdos.  There’s absolutely nothing original or individualistic about looking like, acting like, or doing like everyone else around you.  In fact, if you want a piece of really good advice, take this from Earl Nightingale, “Whatever the great majority is doing, in any circumstance, if you do the exact opposite, you’ll probably never make a mistake as long as you live”

Now, I hope you’re not too mad at me.  If you are, you can take all of what I said and use it as motivation to get your D1 scholarship and your NBA contract, if you’d like.  I’d be happy to see you achieve both and would not mind at all you thumbing your nose at me when you cross the finish line.  I’d much rather say “congratulations” than “I told you so”.  But please know my purpose in writing you this letter was not to kill your dreams, rather it was to perhaps change your thinking in some small way.  Because, as it was once said, “If your way of thinking changes, your actions change.  If your actions change, your habits change.  If your habits change, your personality changes, and if your personality changes, your self changes.  And once your self is changed, your whole life is different.”

___________, I’d much rather interview you for the documentary I tentatively plan on doing in 10 or 15 years and have you repeatedly say “I am” rather than “I was”.  Your best years should always be ahead of you.

Keenan
Posted by Chad Cook at 8:42 PM No comments:

***This "flashback post" was originally posted at AugustaEagles.blogspot.com (my "old" blog). It is still there but I no longer post there. I moved it to this blog because Laney is a team I am tracking, and pulling for.***


I have long been impressed with the Laney (Southern Kings AAU) trio of Jayshawn Brooks, Jalen Taylor, and Jervon Walker. I saw them consistently play hard and play well as they tore through Laney's June Summer League schedule, including an undefeated run through the Augusta Metros Summer Series. And they were at it again Tuesday at the old Columbia Middle during the first session of the ABR Live Summer Send-off.

As expected, Laney coach Buck Harris' guys play the game the right way. Brooks is a lights out shooter with very good athleticism. And he is rapidly improving his ability to create off the dribble. Taylor is long and athletic. And he can bury the mid range jumper consistently. Walker plays harder than most, sacrificing his body for loose ball and rebounds, running the court, and finishing in the paint.

Brooks is probably a future shooting guard in a division 1 program. But at the high school and AAU level, these three make up a formidable front line.
Stay tuned to this site for updates about the Southern Kings 17u an the rest of the areas AAU teams who are competing during July's evaluation period. And watch for the July 14-15 ABR Summer Send-off Session 2" schedule!
Posted by Chad Cook at 11:34 AM No comments:

Reid Impressive in his Return

***This "flashback post" was originally posted at AugustaEagles.blogspot.com (my "old" blog).  It is still there but I no longer post there.  I moved it to this blog because Reggie is someone I am tracking, and pulling for.***


It has been 16 months since we have seen former Harlem guard Reggie Reid.  After leading Harlem to a .500+ record and a spot in the 2012 GHSA state playoffs, Reid transferred to Elev8 Academy in Florida.  Tuesday at the first session of the "ABR Live Summer Send-off" was our first look at him since the 2012 Spring Showcase.


Reid has always been an exceptional athlete who uses his quickness to attack the basket and his strength to finish in the paint.  And one look at Tuesday's pre-game lay up line was enough to verify that Reggie has continued to develop his athleticism.  But during the game, he also showed the ability to knock down the perimeter shot off the catch and off the dribble.  I look forward to seeing Reggie play this month with his Augusta based Southern Kings team.

The Southern Kings will compete in the Augusta/Aiken based Peach State Summer Showcase July 16-20.  But they will begin the evaluation period today with an 8:00 P.M. game in Atlanta against the nation's 5th ranked AAU team, the Florida Vipers.

Stay tuned for more stories and videos about the area players we hosted Tuesday in session 1 of the "ABR Live Summer Send-off."  And watch for the July 14-15 session 2 schedule!
Posted by Chad Cook at 10:41 AM No comments: