Rod Hall Jr. is on the Right Track

***This "flashback post" was originally posted at AugustaEagles.blogspot.com (my "old" blog).  It is still there but I no longer post there.  I moved it to this blog because Rod is someone I am tracking, and pulling for.***

Last night I watched Augusta native and former Laney Wildcat Rod Hall Jr. score a team leading16 points, dish out 4 assists, and nearly lead his Clemson Tigers to a win over UMass in the championship game of the Charleston Classic.  Hall, the Tigers' Junior point guard, has been a major contributor since stepping on campus two seasons ago.  He has carved out a niche for himself as a defensive stopper.  And after five games, he is proving to be a reliable scoring option for this season's team.

Rod is averaging just under 12 points per contest, second on the team.  And his best scoring nights have come in the team's three most competitive games (16 versus UMass, 14 versus South Carolina, and 13 versus Temple).  Seeing him take and make jump shots consistently is great.  I've known he can shoot from deep since he was making threes as a nine year old at the Dogwood Terrace Boys and Girls Club in Augusta.  His patience and demeanor have served him well as he has taken the time over the past two seasons to learn to run an ACC team.  Now he seems to be putting it all together for the 5-1 Tigers.

But as good as it is to see Rod playing well, it is so much better to see him doing well.  There is not a kinder young man than "Junior."  By the time he had led Laney to its second consecutive final four and signed a scholarship to play basketball at Clemson, he had reached "local celebrity" status in our town. But you would never know it by the way he carries himself.  He is humble and focused on succeeding on and off the court.  It is impossible to know him well and not love him.

And if there is any doubt about whether Rod's bigger offensive role will detract from his defensive performance, he held Chaz Williams (UMass's leading scorer at 18.4 ppg heading into the contest) to 4 points on one field goal Sunday!

*Below are some highlights I found on Clemson's website.

Laney and Aquinas Open Seasons with a Statement

***This "flashback post" was originally posted at AugustaEagles.blogspot.com (my "old" blog).  It is still there but I no longer post there.  I moved it to this blog because Laney is a team I am tracking, and pulling for.***

Aquinas and Laney are believed to be two of our area's best teams.  Both teams are poised to make significant improvements over last season's state tournament final four runs.  Laney will look to its returning core of young players who benefited from last season's on the court trial and error.  And Aquinas' dynamo Ahmed Hill welcomes newcomers Tamyrick Fields (6'6") and San Antonio Brinson (6'5"), whose length and activity is intriguing.
After Aquinas' comfortable handling of Cross Creek Friday and Butler Saturday and Laney's dismantling of Charlotte's Vance Friday in the ABR Live Tip-Off Tournament at Evans High School, the teams appear every bit as good as advertised.  Spectators were already discussing the MLK Day matchup between these teams.  And the squads' contrasting styles should be fun to watch.  But long before the January 20 matchup at Evans High, both teams will have had many opportunities to prove they are in fact on track to compete for a state championship in March.


Ahead for Aquinas
This Friday, Butler gets a rematch with Aquinas and a chance to prove its opening losses last weekend were temporary setbacks.  Aquinas also faces South Carolina power Keenan and area juggernaut Glenn Hills twice each before facing Laney.
The Irish looked dominant against Butler Saturday.  Hill methodically ran coach Bernie Norris' offensive sets, comfortable in the knowledge that he could muscle his way through or elevate his way over Butler's guards and get good shots regardless of the situation.  And Fields is relentless on the offensive glass.  Not to mention sophomore guard Kham Gordon, who grabbed 4 first half offensive rebounds and converted them into timely baskets that helped the Irish establish control.
Aquinas has always been one of the state's best class A teams.  Hill's ability to consistently get his team good shots and the team's ability to rebound and score in the paint may make the Irish one of the best high school teams we'll see in any class.
Laney's Coming Challenges 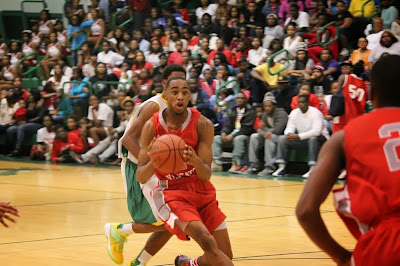 I missed Friday's 37 point Laney victory. But a high school student I know described the Wildcats as being "in great condition!"  I assume my young friend was describing the appearance of swarming full court pressure and a constant attacking of the basket that is familiar from coach Buck Harris' extremely athletic, highly skilled, and deep group.  While Aquinas gets the job done with strength and length, this bunch will apply a maximum amount of pressure on opposing guards on both ends of the court.  All 84 feet.  Sophomores Zep Jasper and Christian Keeling and junior Jashawn Brooks can all score in bunches.  Juniors Jalen Taylor and Jervon Walker are two of many hungry forwards who will rebound, finish, and defend.  And Jasper makes it his business to get the ball in the right hands in the right spots.

Like Aquinas, Laney will be tested early and often.  This weekend's matchup with one of the area's most talented teams, North Augusta, will tell us more about both teams.  I chose The Yellow Jackets as the area's 5th best team heading into the season.  And the Wildcats will face Glenn Hills and Butler twice each before facing sub region foes Westside and Josey.  But one of the biggest tests for Harris' group may be a December matchup with Atlanta power Stephenson, who last weekend man-handled Butler and Vance.
The Wildcats' young squad went 2-7 versus the area's best teams (Glenn Hills, Westside, Butler, and Aquinas) last season.  With that experience behind them, Laney will have a chance to prepare for its sub region and post season races by testing itself against the best again this year.  The next 60 days should be exciting!

I had a few people in mind for the second interview in this series.  I ended up choosing Derek Stewart (1989-1993), the second all-time leading scorer in school history.  I decided to make him the subject because Brian’s reference to him in the last interview reminded me of our own special connection.  As uncool as this may sound, I’m going to describe that connection using the X-Men comic books.  For the uninitiated, the X-Men were superheroes.  They all had some kind of special mutant super power.  In a way, we basketball players were kind of the same, minus the spandex and masks, in that most of us had a special skill that we brought to the team.  I was different in that I didn’t really bring anything unique to the table.  Derek, on the other hand, brought several specialized skills with him.  As any reader of the comics will know, a certain member of the X-Men team, Calvin Rankin (AKA Mimic for the real X-Men nerds like me and John Walker), had the power to imitate the abilities of others for a short period of time.  Mimic’s quest (mine too secretly) was to make the powers that he copied from his teammates permanent.  He never achieved that goal.   I didn’t either, but I sure did spend lots of time copying Derek and trying to make his skills my own.  Again I never succeeded in my quest for permanency, but my failure, in that context, didn’t turn out so badly either.

2)     I came in as a freshman with a chip on my shoulder. My freshman class included Todd Holts, Bernard Pettiford, Cedric Hurst, and Rob Harris. After we had all signed, Gerald (White) sent me an article from the Chronicle about all of us having signed. In the article, they talked about each player and what they were expected to contribute during the upcoming season. Bernard, Todd, and Rob were expected to battle for the starting position at center, Ced was expected to challenge for minutes at the point, and I was expected to “add depth to the frontcourt.”  I was offended when I read that and swore at that moment that by the time we all left AC, I would bet the best of the whole group.